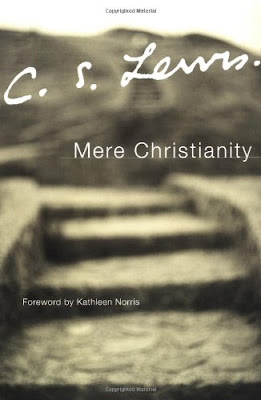 Mere Christianity is a theological book by C. S. Lewis, adapted from a series of BBC radio talks made between 1941 and 1944, while Lewis was at Oxford during World War II. Considered a classic of Christian apologetics, the transcripts of the broadcasts originally appeared in print as three separate pamphlets: The Case for Christianity (1942), Christian Behaviour (1942), and Beyond Personality (1944). Lewis was invited to give the talks by Rev. James Welch, the BBC Director of Religious Broadcasting, who had read his 1940 book, The Problem of Pain.

Lewis, an Anglican, intended to describe the Christian common ground. In Mere Christianity, he aims at avoiding controversies to explain fundamental teachings of Christianity, for the sake of those basically educated as well as the intellectuals of his generation, for whom the jargon of formal Christian theology did not retain its original meaning.

In 2006, Mere Christianity was placed third in Christianity Today's list of the most influential books amongst evangelicals since 1945. The title has influenced Touchstone Magazine: A Journal of Mere Christianity and William Dembski's book Mere Creation. Charles Colson's conversion to Christianity resulted from his reading this book, as it did to Francis Collins, Josh Caterer and the philosopher C. E. M. Joad.

A passage in the book also influenced the name of contemporary Christian Texan Grammy-nominated pop/rock group Sixpence None the Richer. The phrase, "the hammering process" was used by Christian metal band Living Sacrifice for the name of their album The Hammering Process. Metalcore band, Norma Jean, derived the title of their song "No Passenger: No Parasite" from the section in the book in which Lewis describes a fully Christian society as having "No passengers or parasites". Singer Brooke Fraser wrote the "C.S.Lewis Song" from the album Albertine, which is heavily indebted to Lewis's works, including the lyrics "If I find in myself desires nothing in this world can satisfy / I can only conclude that I was not made for here."

Email ThisBlogThis!Share to TwitterShare to FacebookShare to Pinterest
Labels: Great Books of The Christian Tradition