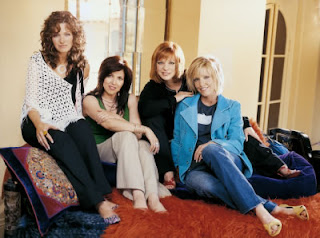 Point of Grace is an all-female Contemporary Christian music group. The trio consists of Shelley Breen, Denise Jones, and Leigh Cappillino. The group started out as a quartet in 1991, with original members Breen and Jones, as well as Terry Jones and Heather Payne. In November 2003, Terry Jones decided she needed to spend more time with her family after giving birth to her third child, and left the group, with Cappillino joining in March 2004 for their 2004 release I Choose You. In June 2008, Payne announced her retirement from the group, in order to spend more time with her husband and four children.

The group's debut self-titled album was released in 1993; since then, they have been recognized as one of the top Contemporary Christian music bands in the United States. In 2003, they released their ninth album, 24 - a compilation of their 24 consecutive No. 1 radio singles. To this date, no band in any genre has matched this record. As of 2006 the girls have 27 No. 1 radio singles.

Point of Grace got its start at Ouachita Baptist University in Arkadelphia, Arkansas. Denise Masters, Terry Lang and Heather Floyd, who knew each other from Norman, Oklahoma, coincidentally found themselves at OBU, and naturally got involved in music. They sang in a vocal group called 'The Ouachitones,' which was made up of 14 girls. Within the group, the girls formed a trio, and after a sound check for a Ouachitones performance, the girls were singing a cappella when they were told by an onlooker that they should do something together. Shelley Phillips had come from Little Rock, Arkansas to OBU with a scholarship in vocal performance. She sang in a group called the Praise Singers, made up of four girls and four guys and they traveled around the country performing concerts. She became friends with Terry and Heather through Denise, who was her roommate and sister in the social club Chi Delta. After Heather, Terry and Denise made plans to form a trio and sing together over the summer, Denise went back to her dorm room and excitedly told Shelley about their summer plans. After Shelley suggested that the trio became a quartet, it seemed to be the perfect fit.

They called themselves Say So, taken after Psalm 107:2 where it says, "Let the redeemed of the Lord say so." It truly was a do-it-yourself project, and group's tasks were delegated amongst themselves according to each one's best ability. Heather took care of publicity and album sales, Terry took care of the money, Shelley was in charge of booking and Denise was in charge of all their music. Before their performances, they were the ones who would haul their equipment onstage and set it up. They developed quite a following that summer, and spent the remainder of the year singing every weekend. After many fan requests, they recorded an independent album, and became favorites in the South and Midwest. Despite not seeing a reason to pursue a major record deal, the girls, encouraged by their family members attended the 1992 Music in the Rockies Christian Artists Seminar in Estes Park, Colorado. They wowed the crowd and the judges when they performed "He's The Best Thing" and wound up winning the Overall Grand Prize in the Group competition.

The girls found that, after their performance, there was major record label interest, and by prayerful decision, the group decided to sign with Word Records. They then moved to Nashville to start work on what would become their self-titled debut album.