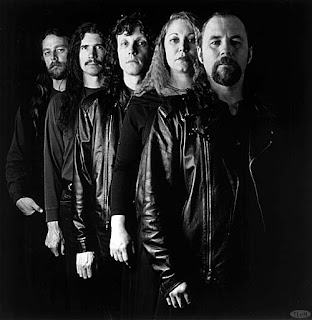 Resurrection Band, also known as Rez Band or REZ, was a Christian rock band formed in 1972. They were based out of the Jesus People USA Christian community in Chicago, Illinois, and most of its members continue to be part of that community to this day. Known for their blend of blues-rock and hard rock, Resurrection Band is credited as one of the forerunners of the Christian metal genre, releasing their debut in 1978. The band's greatest popularity was during the early 1980s, but later in the decade, they received some crossover success when they had two music videos featured on MTV.

Led by the husband-and-wife team of Glenn and Wendi Kaiser, the band sought to evangelize using Christian rock, and addressed a variety of social ills in the lyrics of their music. While the group is officially disbanded, they occasionally play one-off dates at the Cornerstone Festival, which members of the band helped establish. Currently Glenn Kaiser has an established solo career as a blues musician and is also a speaker on various spiritual issues to youth and adults.

The band originally played together under the name "Charity" in 1972 with Jesus People Milwaukee, based out of Milwaukee. When the community split into four groups, and one became the "Jesus People USA Travelling Team" before their relocation to Chicago, the name "Resurrection Band" was chosen and the band became a primary focus of the community's ministry. After arriving in Chicago, the band recorded two independent cassettes that were given away after their concerts, which were performed anywhere Resurrection Band was allowed to play, from schools to prisons to street corners. The first cassette, Music to Raise the Dead, featured hard rock, while All Your Life comprised only their acoustic numbers, which was a reflection of the folk-oriented sets they would play at more conservative venues such as nursing homes and churches, the latter of which were deeply skeptical of Christian rock, especially the borderline heavy metal that Resurrection Band specialized in.

Four years later, thanks to a $8000 gift from a friend, Resurrection Band recorded their first album, Awaiting Your Reply, over a two-week period in marathon all-night sessions. Although the band had completed the album, including the cover art, no Christian record label would risk releasing it, as the Led Zeppelin/Jefferson Airplane inspired music was considered much too controversial for the Christian market at that time. Although Star Song Records was warned away from the project by other gospel music executives, the tiny label had nothing to lose, so they signed the band and released the record as it was. To everyone's surprise, Awaiting Your Reply hit big in the Christian market, and reached #6 on the Gospel album sales charts. Although misunderstood by many critics at the time, the album has been reevaluated and highly praised in recent years, and is now listed at #91 in the book, CCM Presents: The 100 Greatest Albums in Christian Music, released in 2001.

The band followed up the success of that album with Rainbow's End, which continued in the same progressive hard rock/metal vein akin to Black Sabbath and Aerosmith. Although the band was pleased with the effort, Star Song was not, and the band was forced to find another label shortly after its release. Rainbow's End is significant for being the first album by an American rock band to address the racist system of apartheid in South Africa, a full year before Peter Gabriel brought the issue to the world's attention with his classic song, "Biko." Resurrection Band would eventually become known for grappling with a variety of social and political ills in its music, from the evils of the military-industrial complex to the corrupting influence of American materialism to racism, homelessness, AIDS, drug addiction, prostitution and many other issues that the band personally confronted in their ministry to their surrounding urban community in Chicago.