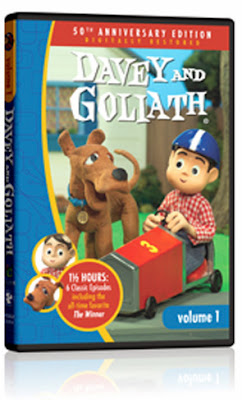 Relive your childhood memories. Features moral themes along with Scholastic Interactive Read-a-long of "The Kite"

Between 1960 and 1975, millions of children worldwide watched the wholesome adventures of Davey and his talking dog, Goliath. Now Davey and Goliath is back in a newly restored collection of six 15-minute episodes, including "Lost in a Cave," "Stranded on an Island," "The Wild Goat," "The Winner," "The New Skates," and "Cousin Barney."

Beloved for its old-fashioned charm and unique stop-motion animation, Davey and Goliath is sure to delight a new generation of viewers with each adventure starring this lovable hero and his canine companion.

In Volume 1, Davey narrowly escapes a creepy cave and realizes that God cares for all His children. Plus, Davey learns to listen to his mom after he ignores her advice and falls through thin ice, and he enters a soap box derby just so he can be like his friend Mike.
Davey & Goliath Volume 1: 50th Anniversary Edition DVD Details: